SURYA DUB - PRESS, OVER THE YEARS 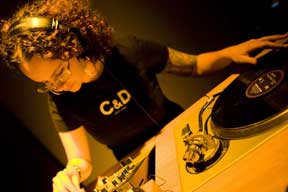 Congrats going out to Surya Dub's DJ Ripley for reppin the ladeez
and bringin home the goods this year in SF Bay Guardian's 4th
Annual Favorite DJs Readers Poll. Thanks for making it 2 years in a
row for the crew. Grab this weeks guardian and check Page 4 for the
full story. more info at
target="_blank">djripley.blogspot.com Catch DJ Ripley before
she embarks on her 6 month research hiatus to Jamaica for her last
session tonight alongside partner Kid Kameleon at the 6th Annual
Creative Commons Holiday Party at 111 Minna.

Jimmy Love and Maneesh the Twister feature in SF
Weekly

"_blank">Surya Dub wins 2008 SF Bay Guardian Best of
the Bay for - Best Ambassadors of Dread Bass
The Surya Dub crew continue to pave the way for new styles and
sounds and along the way get a newly created section in the BoB..
Super thanks to our fans and supporters round the world for this!
Here's what the Guardian says...

"That cracked and funky dubstep sound surged through Clubland's
speakers last year, an irresistible combination of breakbeats
energy, dub wooziness, sly grime, intel glitch, and ragga
relaxation. Many parties took the sound into uncharted waters,
infusing it with hip-hop hooks, Bollywood extravaganza, roots rock
swing, or "world music" folksiness. But only one included all those
variations simultaneously, while pumping local and international
live acts, fierce visuals, multimedia blowouts, and an ever-smiling
crowd of rainbow-flavored fans: Surya Dub, a monthly lowdown
hoedown at Club Six. The Surya crew, including perennial Bay
favorites DJ Maneesh the Twister and Jimmy Love, and wondrous
up-and-comers like Kush Arora, Kid Kameleon, DJ Amar, Ripley, and
MC Daddy Frank on the mic, describes its ass-thumping sound as
"dread bass," which moves beyond wordy genre description into a
cosmic territory the rumble in your eardrums can surely attest to.
Surya Dub keeps it in the community, too, helping to promote a
growing network of citywide dubstep events and spreading their
dread bass gospel with parties in India." 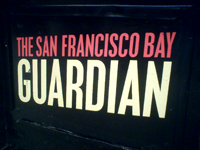 
Surya Dub feature in SF Bay Guardian
The San Francisco Bay Guardian's Marke B. aka Superego gets the
skinny on the fat bass-driven culture of Surya Dub in this week's
feature with SD resident and founder Maneesh the Twister.
Check out "http://www.sfbg.com/entry.php?entry_id=5444&catid=107&volume_id=317&issue_id=335&volume_num=42&issue_num=16"
target="_blank">superego column here and "http://www.sfbg.com/blogs/music/2008/01/taste_the_dub_surya_dub_steps.html"
target="_blank">the interview here! 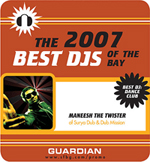 Here's what the they say, "As co-founder of the Dhamaal Artist
Collective, Maneesh the Twister was already an established figure
in the Bay Area's thriving South Asian hybrid beats scene when he
founded Surya Dub at Club Six (every 4th Saturday). In less than a
year, this monthly party has become the premier destination for the
dubwize community. His reputation for bass-driven eclecticism -
encompassing everything from Roots Reggae to Dubstep, Breakbeat to
Bhangra, South Asian Electronica and Global Bass Beat - has
garnered a passionate following and multiple accolades and awards.
Get your ass down to Club Six and prepare to shake it, and don't
miss his sets at Dub Mission, the nation's longest-running weekly
dub & roots night at Elbo Room every Sunday!" Grab a Guardian
at a newstand near you and check out the Scene supplement for all
the winners.

"http://blogs.sfweekly.com/shookdown/2007/10/and_the_winners_are_results_fr.php"
target="_blank">Surya Dub Selected Best Club Night
by SF Weekly Music Awards 2007!
Surya Dub is extremely honored and proud to announce that we
have been selected as the 2007 Best Club Night by the SF Weekly
Music Awards! We couldn't have done it without your support!! THANK
YOU ALL!
We feel very blessed to have been selected as one of the top club
nights in our highly respected San Francisco club scene. Having
been around less than a year makes this even more special that we
have been recognized as one of the most innovative and
ground-breaking nights; In fact we are the only underground night
representing Dubstep, Reggae, DnB or Global Beats to even have been
nominated!

"http://suryadub.ning.com/profiles/blogs/sf-weekly-surya-dub-article">SF
Weekly - Surya Dub Article Dubbing is a
Must!
Maneesh the Twister and several of the Surya Dub crew recently
spoke with SF Weekly writer, Eric K. Arnold about the launch of
Surya Dub and the global dub movement, which has emerged on the
cutting edge of the SF electronic scene. Click here to check
it!

Pitchfork magazine's Martin Clark aka Blackdown features Surya Dub
and Sub Swara in "The Month In: Grime/Dubstep." Check out what they
say about how these two events are pushing this sound further into
uncharted territory while uniting and mutating dubstep with
dancehall, dub, desi vibes and much more!