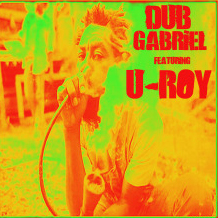 Straight outta Kingston Jamaica via San Francisco and beyond, Luv ‘n Liv is the first single to drop from Dub Gabriel’s upcoming 4th studio album, The Cut Up. Featuring the mighty Dread in a Babylon, U-Roy (The Originator), Luv ‘n Liv lays testament to all that can be when you put a reggae legend in the same room as one of America’s leading producers of nu-dub.

With the original hook-up coming through none other than Scientist himself, U-Roy & Dub Gabriel went deep in Mark Pistel’s (Hercules & The Love Affair/Meat Beat Manifesto) Room 5 studio and emerged with Luv ‘n Liv. To round things out, DG enlisted David J of Bauhaus and Love & Rockets to hold down the bass, and Ysanne Spevack on strings who was fresh from her recent work with the Smashing Pumpkins. The outcome is pretty epic if we say so ourselves.

Bridging the living roots of dub to the future-present world of dubstep, DG also brought in some of the hottest producers in the game to remix the track, including Ming (Ming & FS), Subatomic Sound System (following up on his highly successful remix for Lee “Scratch” Perry), Lloop (The Agriculture Records) and Timeblind (Tigerbeat 6). Finally, for all those who crave a good dosage of roots, Dub Gabriel brings things back down to earth with a soulful version of Luv ‘n Liv backed by none other than Yellowman’s original Sagittarius Band. Respect!