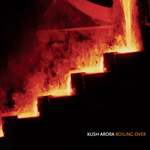 RecordLabelRecords is proud to present Boiling Over, a collection of 7 tracks highlighting the dynamic and dark cultural dubstep style that Kush Arora has done in his collaborations and singles over the past 2 years.From tribal grime explorations to UK garage this is a fluid journey through the outer realms of the bass underground that have become his signature sound in dubsessions around the world. Since 2004, this is the first step away from dancehall and a full instrumental release from Kush to present all the influences of the past 5 years. The combination tunes with Sub Swara and J.Rogers span the desi 2 step and deep bass realms, while Kush's ambient past is revealed on “The Staircase. Kush collabs with longtime Surya founder Maneesh The Twister and Bay Area Dub bubblers The Spit Brothers in a Uk digital steppers tribute as well, going full circle in his sonic inspirations.” RecordLabelRecords was the very first label to release his music, and now proudly presents again half a decade later the evolution of the sound.